Probably the best village in the world

Bucklesham St Mary’s Church is a Grade II listed building where villagers have worshipped for over 900 years.  It is mentioned in the Domesday Book compiled in 1086 at which time it was most likely a simple wooden building.  In the 12th Century a new church, with flint rubble walls, was built and much of its north wall may still be seen in the present building.

In the 1870’s St Mary’s was badly in need of restoration.  Fortunately for we current residents the Victorians brought about a thorough and drastic transformation which villagers could barely have recognised when it was re-opened in January 1879. 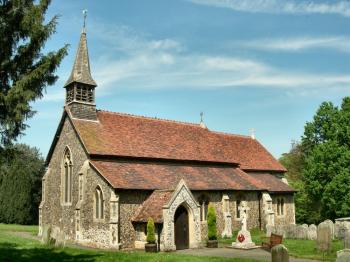 Today the Church and churchyard provide a wonderful haven for wildlife situated as it is on the secluded north eastern edge of our village amidst beautiful shady trees and a large grassy area that provides a perfect setting for anyone wishing to experience a few peaceful moments away from the busy daily routine.  In late winter and early spring there are delightful displays of snowdrops and daffodils to add to the idyllic surroundings.

The Church spire had by 2011 become the target of drilling woodpeckers who had pierced the cedar shakes with numerous ominous holes.  In 2014 extensive repairs completely replaced the existing shakes with oak shakes on a steel backing making the spire ‘birdproof’.  During construction work, John Riches assembled a ‘time capsule’ which is now placed high in the spire for future generations to discover.

The village War Memorial Crucifix stands proud near the church porch.  Every year on Armistice Sunday wreathes of poppies are placed by many local organisations in tribute to the local heroes named on the monument who died in the two world wars of the twentieth century.

Normally, an open church policy is in operation at St Marys which means that the church is open every day during daylight hours.  However, because of the Covid19 virus, during the week, opening times are for private prayer and reflection only and the hours of opening are very restricted.  For the foreseeable future Sunday Services will take place only on certain restricted dates.

The times of opening both during the week and on Sundays are advertised well in advance on the Church Notice Board at the main entrance to the churchyard.